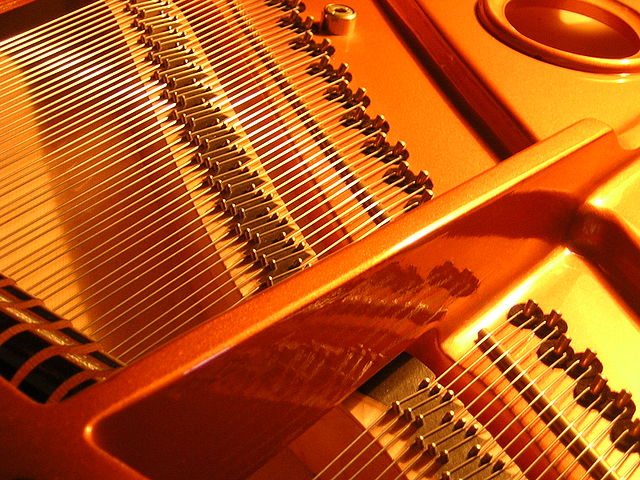 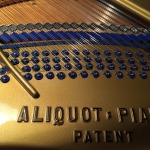 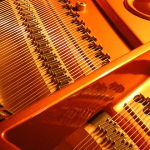 Duplex scaling, built into some grand pianos, can be found on that portion of the string in the treble section between the back bridge pin and the hitch pin which is normally the non-speaking part of the string and dampened with a strip of cloth. Where there is duplex scaling this section is deliberately left open to resonate in sympathy with the speaking part of the string and add brightness to the upper partials. When designed properly the duplex scaling should be tuned to a fixed interval of the speaking length of the string such as a fifth, twelfth, octave or double octave. Most pianos with this feature have a factory set tuned length; some are tuneable but are rarely tuned as regularly as conventional tuning. The overall effect of a piano with resonating lengths of string producing dissonant overtones can be described either as powerful or having a tinny, cymbal-like ringing sound; larger pianos certainly benefit more from the positive qualities of duplex scaling than small ‘baby’ grands. Inevitably, the top treble section will also have a ringing section of the string between the top bridge or agraffe and the wrest pin (tuning pin). Where the piano is used in a domestic setting, this section is often damped by the tuner to achieve a clearer, less ringing sound in the treble. Pianos with duplex scaling tend to require more skill to achieve a firm tuning and therefore might take a little longer to tune.

Closely related to duplex scaling is aliquot scaling found on some Blüthner grands which consists of an extra set of strings positioned above the treble strings. These are not struck by the hammers but resonate sympathetically, being tuned in unison or to the octave above, the struck strings beneath. The effect is far more subtle than duplex scaling, some would say it has no effect at all, but is easily tuned accurately by the extra wrest pin provided.

Tone collectors are steel bolts which connect the iron frame to the back bracings of the piano. They are not fitted to all pianos and it doesn’t mean your piano is inferior for not having them! By directly connecting the frame to the external construction of the piano, designers are creating a rigid acoustical framework which reflects energy that might have otherwise been lost to the casework, back onto the soundboard where it produces a fuller, richer sound with more sustain. Most pianos produced today will have tone collectors and contribute to the overall sound quality and it would be difficult to isolate one factor in the construction of a piano to assess its effectiveness. There are many pianos which do not have tone collectors but still manage to achieve a full, rich sound with lots of sustain. Although they can be a sign of design and build quality, if you are stuck for choice between a new piano with tone collectors and one without, go for the one which has the sound quality you like.