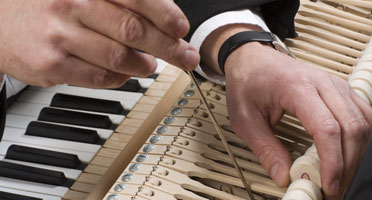 My tuner recently paid his six monthly visit to my 30 year old Yamaha upright and managed to break a string whilst tuning it. I was charged an extra £10 for replacing it but now I wonder if I was right to pay it?

You are probably wondering why you should have to pay for a problem which the tuner apparently caused in the first place. Pity the poor tuner! It was almost certainly not his fault that the string broke but an unfortunate consequence of the tuning process – rest assured that the tuner was just as annoyed as you were for breaking the rhythm of his tuning. The secret of a good tuning lies in the ability of the tuner to ‘set the pin’ so that the piano remains in tune for a reasonable length of time, assuming the piano is in good condition. This requires the strings to be struck with considerable force, more than you would use in normal playing. Sometimes a string which has been weakened by time or rust breaks during this process which could be an early warning sign that others are also about to break. If the broken string happens to be one in the copper covered bass section, be prepared to pay more as a replacement will have to be made by a specialist piano string maker which will entail a return visit to fit. Consider broken strings to be part of the ongoing maintenance of a piano. Therefore, it was correct to be charged an extra £10 which is a very reasonable sum for a job which requires considerable skill.